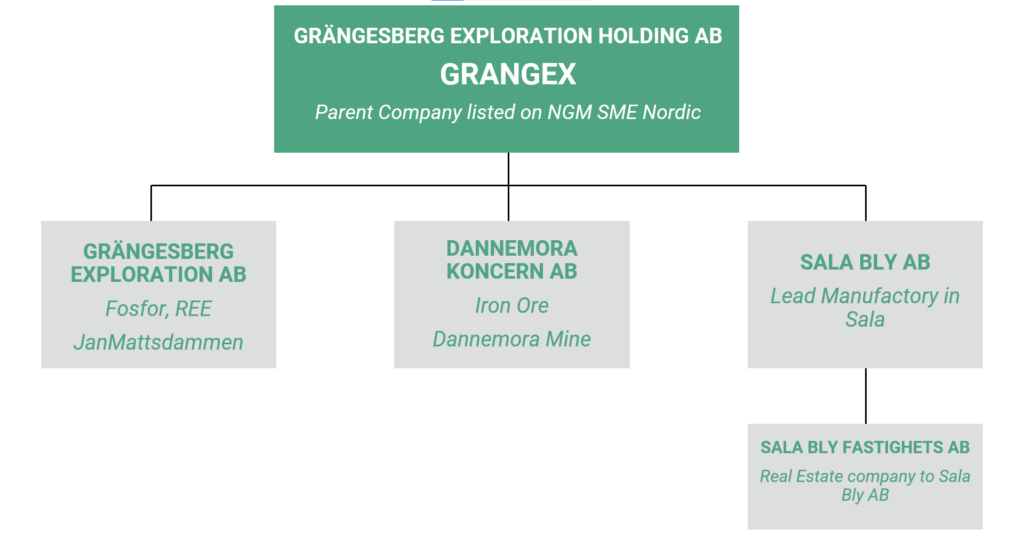 As a limited company in Sweden, Grängesberg Exploration Holding AB (publ) is regulated in accordance with the provisions of the Swedish Companies Act and the company’s Articles of Association. The Board of Directors is responsible for the control and governance of the company, and the CEO has the day-to-day responsibility. The shareholders exercise control over the company’s administration via resolutions at general meetings.

The main objectives of corporate governance are to promote active and responsible ownership, to maintain an open and healthy balance of power between owners, the Board of Directors and management, and to ensure accurate and accessible company information to shareholders, the capital market and society.

The Board of Directors is responsible for ensuring that the company’s organisation is designed in such a way that the company’s financial conditions can be controlled satisfactorily, and that all financial information, such as interim reports and annual reports, are prepared in accordance with good accounting practice, applicable laws and regulations, and other requirements on listed companies. The company applies the K3 regulatory framework in its reporting.

The company reports its mineral assets and mineral reserves in accordance with JORC code 2012.

Interim reports are prepared by the CEO on behalf of the Board of Directors, which are reviewed by the Board in their entirety. The CEO ensures that reporting in the group’s companies takes place in accordance with laws and ordinances, and that financial management takes place in a satisfactory manner.

The company works continuously on assessing and evaluating the risks that the group has and may be exposed to.

The CEO and the Board of Directors are responsible for specifying and implementing daily risk management procedures, and ensuring that the risks are taken into account in the group’s strategic planning.

The CEO coordinates the risk management activities and risk reporting.

The company divides its risks into two main categories: financial and operational risks. The risks that Grängesberg Exploration Holding AB has, or may be exposed to, are described in the annual report for 2020, pages 20-21.

The most important aspect of internal control and risk management is exercised by the Board of Directors.

A list of the company’s largest shareholders is available under the heading ‘The Stock’ on the website and is updated regularly.

The Annual General Meeting (AGM) is the company’s highest decision-making body. The AGM elects board members, approves the income statement and balance sheet, decides on the appropriation of profits and discharge of liability for the board members, and approves fees to the board and auditor. The AGM authorises the Board of Directors to make decisions on matters that do not relate to day-to-day operations.

All shares in Grängesberg Exploration Holding AB have the same voting rights, with one vote per share.

All shareholders who are entered in the share register, and who have notified the company of their participation within the time specified in the notice convening the meeting, have the right to participate in the company’s general meetings and vote for their shares. Shareholders may also be represented by a proxy at the meeting. The company is governed by the Annual General Meeting, the Board of Directors, and the CEO in accordance with the rules and ordinances regulated by law or other statutes.

The following resolutions were passed at the meeting:

Each year, the Board of Directors shall hold at least six meetings, one statutory and five regular board meetings. The regular meetings shall deal with the CEO’s report on operations and interim reporting.